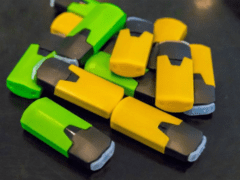 JUUL and other brands of podlike e-cigarettes have become the most popular vape in the United States, especially among U.S. teens (despite them being illegal for minors.)

addicted     Unable to control the use of a habit-forming drug or to forego an unhealthy habit (such as video game playing or phone texting). It results from an illness triggered by brain changes that occur after using some drugs or engaging in some extremely pleasurable activities. People with an addiction will feel a compelling need to engage in some behavior, such as using a drug (which can be alcohol, the nicotine in tobacco, a prescription drug or an illegal chemical such as cocaine or heroin) — even when the user knows that doing so risks severe health or legal consequences.

adolescence     A transitional stage of physical and psychological development that begins at the onset of puberty, typically between the ages of 11 and 13, and ends with adulthood. Someone this age is known as an adolescent.

aggressive     (n. aggressiveness) Quick to fight or argue, or forceful in making efforts to succeed or win.

bond     (in chemistry) A semi-permanent attachment between atoms — or groups of atoms — in a molecule. It’s formed by an attractive force between the participating atoms. Once bonded, the atoms will work as a unit. To separate the component atoms, energy must be supplied to the molecule as heat or some other type of radiation.

chemistry     The field of science that deals with the composition, structure and properties of substances and how they interact. Scientists use this knowledge to study unfamiliar substances, to reproduce large quantities of useful substances or to design and create new and useful substances. (about compounds) Chemistry also is used as a term to refer to the recipe of a compound, the way it’s produced or some of its properties. People who work in this field are known as chemists.

developmental     (in biology) An adjective that refers to the changes an organism undergoes from conception through adulthood. Those changes often involve chemistry, size and sometimes even shape.

e-cigarette     (short for electronic cigarette) Battery-powered device that disperses nicotine and other chemicals as tiny airborne particles that users can inhale. They were originally developed as a safer alternative to cigarettes that users could use as they tried to slowly break their addiction to the nicotine in tobacco products. These devices heat up a flavored liquid until it evaporates, producing vapors. People use these devices are known as vapers.

ENDS     Short for electronic nicotine delivery systems. It’s a term developed by the U.S. Food and Drug Administration to refer to a range of products that can dispense nicotine. It includes but is not limited to: vapes or vape pens, personal vaporizers, e-cigarettes, cigalikes, e-pens, e-hookahs, e-cigars and e-pipes. Also included are the liquids used in those devices, most of which are flavored and contain nicotine. Since tobacco is the source of nicotine, these goods are all regulated as tobacco-related products. There sale and use are both prohibited by minors, at least in the United States.

engineering     The field of research that uses math and science to solve practical problems.

flavor     The particular mix of sensations that help people recognize something that has passed through the mouth. This is based largely on how a food or drink is sensed by cells in the mouth. It also can be influenced, to some extent, by its smell, look or texture.

Food and Drug Administration (or FDA)     A part of the U.S. Department of Health and Human Services, FDA is charged with overseeing the safety of many products. For instance, it is responsible for making sure drugs are properly labeled, safe and effective; that cosmetics and food supplements are safe and properly labeled; and that tobacco products are regulated.

generation     A group of individuals (in any species) born at about the same time or that are regarded as a single group. Your parents belong to one generation of your family, for example, and your grandparents to another. The term also is sometimes extended to year classes of other animals or to types of inanimate objects (such as electronics or automobiles).

Intel International Science and Engineering Fair     (Intel ISEF) Initially launched in 1950, this competition is one of three created (and still run) by the Society for Science & the Public. Each year now, approximately 1,800 high school students from more than 80 countries, regions, and territories are awarded the opportunity to showcase their independent research at Intel ISEF and compete for an average of almost $5 million in prizes.

journal     (in science) A publication in which scientists share their research findings with experts (and sometimes even the public).

marketing     The strategy for getting people to adopt a new policy or buy new products. In many cases, the marketing may rely on advertising or getting celebrities and other trendsetters to endorse a policy or product.

mechanical     Having to do with the devices that move, including tools, engines and other machines (even, potentially, living machines); or something caused by the physical movement of another thing.

minors     Children and adolescents below an age that would make them legally adults.

National Institutes of Health (or NIH)    This is the largest biomedical research organization in the world. A part of the U.S. government, it consists of 21 separate institutes — such as the National Cancer Institute and the National Human Genome Research Institute — and six additional centers. Most are located on a 300-acre facility in Bethesda, Md., a campus containing 75 buildings. The institutes employ nearly 6,000 scientists and provide research funding to more than 300,000 additional researchers working at more than 2,500 other institutions around the world.

network     A group of interconnected people or things. (v.) The act of connecting with other people who work in a given area or do similar thing (such as artists, business leaders or medical-support groups), often by going to gatherings where such people would be expected, and then chatting them up. (n. networking)

nicotine     A colorless, oily chemical produced in tobacco and certain other plants. It creates the “buzz” associated with smoking. Highly addictive, nicotine is the substance that makes it hard for smokers to give up their use of cigarettes. The chemical is also a poison, sometimes used as a pesticide to kill insects and even some invasive snakes or frogs.

patent     A legal document that gives inventors control over how their inventions — including devices, machines, materials, processes and substances — are made, used and sold for a set period of time. Currently in the United States, this runs 20 years from the date you first file for the patent. The U.S. government only grants patents to inventions shown to be unique.

preliminary     An early step or stage that precedes something more important.

range     The full extent or distribution of something. For instance, a plant or animal’s range is the area over which it naturally exists.

recall     (in cognition) To remember.

recruit     (noun) New member of a group or human trial. (verb) To enroll a new member into a research trial. Some may receive money or other compensation for their participation, particularly if they enter the trial healthy.

rodent     A mammal of the order Rodentia, a group that includes mice, rats, squirrels, guinea pigs, hamsters and porcupines.

salt     A compound made by combining an acid with a base (in a reaction that also creates water). The ocean contains many different salts — collectively called “sea salt.” Common table salt is a made of sodium and chlorine.

smoking     A term for the deliberate inhalation of tobacco smoke from burning cigarettes.

substance abuse     Another term for drug abuse. It refers to a condition where people may become dependent or even addicted to alcohol, tobacco or other types of drugs (either street drugs or prescription medications). These people do not use drugs to treat a medical condition but as an unhealthy way to alter the way they think, feel or respond to outside stimuli.

survey     To view, examine, measure or evaluate something, often land or broad aspects of a landscape. (with people) To ask questions that glean data on the opinions, practices (such as dining or sleeping habits), knowledge or skills of a broad range of people. Researchers select the number and types of people questioned in hopes that the answers these individuals give will be representative of others who are their age, belong to the same ethnic group or live in the same region. (n.) The list of questions that will be offered to glean those data.

tobacco     A plant cultivated for its leaves, which many people burn in cigars, cigarettes, and pipes. Tobacco leaves also are sometimes chewed. The main active drug in tobacco leaves is nicotine, a powerful stimulant (and poison).

tool     An object that a person or other animal makes or obtains and then uses to carry out some purpose such as reaching food, defending itself or grooming.

tween     A child just approaching his or her teenage years. Tween is a term usually used for 11- to 12-year-olds.

vape     (v.) Slang term for the act of inhaling the vapors from an electronic cigarette. (n) Slang for the pen, pod, mod or other type of e-cigarette that someone might use in vaping.

vapors     Fumes released when a liquid transforms to a gas, usually as a result of heating.

wean     (adj. and v. weaning) The process in young mammals of transitioning from a diet of mother’s milk to other foods.