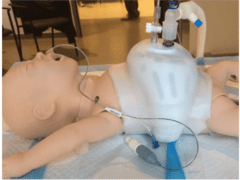 Called NeoVest, it does away with the traditional mask and breathing tubes that get in the way of a baby feeding and bonding with its parents.

biomedical     Having to do with medicine and how it interacts with cells or tissues.

contract     To activate muscle by allowing filaments in the muscle cells to connect. The muscle becomes more rigid as a result.

diaphragm     A thin, flexible wall or partition. (in biology) The muscular wall in mammals that separates the thorax from the abdomen. In breathing, its contractions open up the thorax, inflating the lungs.

impair     (n. impairment) To damage or weaken in some way.

mechanical     Having to do with the devices that move, including tools, engines and other machines (even, potentially, living machines); or something caused by the physical movement of another thing.

pediatrician     A doctor who works in the field of medicine that has to do with children and especially child health.

physiologist     A scientist who studies the branch of biology that deals with how the bodies of healthy organisms function under normal circumstances.

premature     Too early; before something should occur. Premature births, for instance, are when babies are born weeks or months early — potentially before they are ready for life on their own, outside their mom’s protective womb.

sedate     To calm and relax an individual, often through use of some drug.

sensor     A device that picks up information on physical or chemical conditions — such as temperature, barometric pressure, salinity, humidity, pH, light intensity or radiation — and stores or broadcasts that information. Scientists and engineers often rely on sensors to inform them of conditions that may change over time or that exist far from where a researcher can measure them directly.

side effects     Unintended problems or harm caused by a procedure or treatment.

vacuum     Space with little or no matter in it. Laboratories or manufacturing plants may use vacuum equipment to pump out air, creating an area known as a vacuum chamber.

ventilation     A system that supplies a room with fresh air or processes that move air around and between different rooms.

ventilator     (in medicine) A device used to help a person breathe — take in oxygen and exhale carbon dioxide — when the body cannot effectively do that on its own.