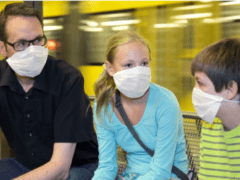 These terms can describe what is happening as a disease spreads

During a disease outbreak, people sometimes wear masks to try to protect themselves. Masks can prevent infected people from spreading germs. But when worn by healthy people, it’s not clear how much masks help.

Ebola: A family of viruses that cause a deadly disease in people. All cases have originated in Africa. Its symptoms include headaches, fever, muscle pain and extensive bleeding. The infection spreads from person to person (or animal to some person) through contact with infected body fluids. The disease gets its name from where the infection was first discovered in 1976 — communities near the Ebola River in what was then known as Zaire (and is now the Democratic Republic of Congo).

epidemic: A widespread outbreak of an infectious disease that sickens many people (or other organisms) in a community at the same time. The term also may be applied to non-infectious diseases or conditions that have spread in a similar way.

infect: To spread a disease from one organism to another. This usually involves introducing some sort of disease-causing germ to an individual.

infectious: An adjective that describes a type of germ that can be transmitted to people, animals or other living things.

influenza: (also known as flu) A highly contagious viral infection of the respiratory passages causing fever and severe aching. It often occurs as an epidemic.

pandemic: An epidemic that affects a large proportion of the population across a country or the world.

plague: (noun) Any horrific infection that spreads easily and kills many people, usually quickly. Best known are the infections caused by the bacterium Yersinia pestis. Indeed, they are commonly referred to simply as the plague. In one form, people pick up the germ from the bite of infected fleas. This inflames the lymph nodes, causing them to swell. Those swollen tissues, called buboes, give this form of the disease its name: bubonic plague. When the disease is instead transmitted by inhaling the bacteria, people develop what’s known as pneumonic plague. This form of the disease can be spread when sick people cough. Pneumonic plague is the most deadly form, often killing its victims within 24 hours. (verb) A common term for being beset by unpleasant conditions, events or circumstances — ones that cause serious impacts.

population: (in biology) A group of individuals from the same species that lives in the same area.

virus: Tiny infectious particles consisting of RNA or DNA surrounded by protein. Viruses can reproduce only by injecting their genetic material into the cells of living creatures. Although scientists frequently refer to viruses as live or dead, in fact no virus is truly alive. It doesn’t eat like animals do, or make its own food the way plants do. It must hijack the cellular machinery of a living cell in order to survive.