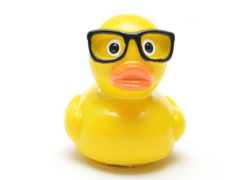 These are chemicals that can contribute to obesity

Soft plastic toys can contain phthalates — chemicals that may contribute to obesity.

development     (in biology) The growth of an organism from conception through adulthood, often undergoing changes in chemistry, size and sometimes even shape.

endocrine disruptor     A substance that mimics the action (sometimes well, sometimes poorly) of one of the body’s natural hormones. By doing this, the fake hormone can inappropriately turn on, speed up or shut down important cellular processes.

fat     A natural oily or greasy substance occurring in plants and in animal bodies, especially when deposited as a layer under the skin or around certain organs. Fat’s primary role is as an energy reserve. Fat also is a vital nutrient, though it can be harmful if consumed in excessive amounts.

hormone     (in zoology and medicine) A chemical produced in a gland and then carried in the bloodstream to another part of the body. Hormones control many important body activities, such as growth. Hormones act by triggering or regulating chemical reactions in the body. (in botany) A chemical that serves as a signaling compound that tells cells of a plant when and how to develop, or when to grow old and die.

obese    Extremely overweight. Obesity is associated with a wide range of health problems, including type 2 diabetes and high blood pressure.

obesogens     Any of a host of different chemicals in the environment — many of them industrial pollutants — that appear capable of signaling the body to fatten up.

phthalates     A family of chemicals used as solvents and added to plastics to increase their flexibility.

plastic     Any of a series of materials that are easily deformable; or synthetic materials that have been made from polymers (long strings of some building-block molecule) that tend to be lightweight, inexpensive and resistant to degradation.

smoke     Plumes of microscopic particles that float in the air. They can be comprised of anything very small. But the best known types are pollutants created by the incomplete burning of oil, wood and other carbon-based materials.