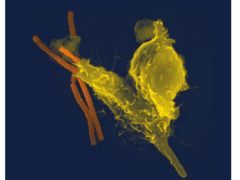 antimicrobial     A substance used to kill or inhibit the growth of microbes. This includes naturally derived chemicals, such as many antibiotic medicines. It also includes synthetic chemical products, such as triclosan and triclocarban. Manufacturers have added some antimicrobials — especially triclosan — to a range of sponges, soaps and other household products to deter the growth of germs.

bacteria   (singular: bacterium) Single-celled organisms. These dwell nearly everywhere on Earth, from the bottom of the sea to inside other living organisms (such as plants and animals).

computer model     A program that runs on a computer that creates a model, or simulation, of a real-world feature, phenomenon or event.

cytokine     A substance secreted by certain cells of the immune system which the body uses to have some particular controlling effect on other cells. Examples include interferons, interleukins and growth factors.

digest     (noun: digestion) To break down food into simple compounds that the body can absorb and use for growth. Some sewage-treatment plants harness microbes to digest — or degrade — wastes so that the breakdown products can be recycled for use elsewhere in the environment.

marrow     (in physiology and medicine) Spongy tissue that develops inside of bones. Most red blood cells, infection-fighting white blood cells and blood platelets form within the marrow.

microbe     Short for microorganism. A living thing that is too small to see with the unaided eye, including bacteria, some fungi and many other organisms such as amoebas. Most consist of a single cell.

model     A simulation of a real-world event (usually using a computer) that has been developed to predict one or more likely outcomes. Or an individual that is meant to display how something would work in or look on others.

neutrophil     A type of white blood cell released by the immune system. It gobbles up wastes and release chemicals that can digest cells, including germs.

prey     (n.) Animal species eaten by others. (v.) To attack and eat another species.