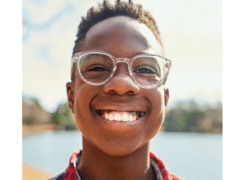 This is the scientific term for nearsightedness, in which people have trouble seeing distant objects

People sometimes have to wear glasses because they have myopia — a condition where distant objects appear fuzzy.

cornea     The transparent front section of the eye. The shape of the cornea allows our eyes to bring objects at many distances into focus.

develop     To emerge or come into being, either naturally or through human intervention, such as by manufacturing. (in biology) To grow as an organism from conception through adulthood, often undergoing changes in chemistry, size and sometimes even shape. (as with towns) The conversion of wildland to host communities of people. This development can include the building of roads, homes, stores, schools and more. Usually, trees and grasslands are cut down and replaced with structures or landscaped yards and parks.

focus  A point at which rays (of light or heat for example), converge to. (In vision) The quality of producing a clear image.

lens     (in biology) A transparent part of the eye behind the colored iris that focuses incoming light onto the light-absorbing membrane at the back of the eyeball. (in physics) A transparent material that can either focus or spread out parallel rays of light as they pass through it. (in optics) A curved piece of transparent material (such as glass) that bends incoming light in such a way as to focus it at a particular point in space. Or something, such as gravity, that can mimic some of the light bending attributes of a physical lens.

myopia     The medical term for nearsightedness. An inability to focus on anything much more than an arm’s length away.

nearsighted    An inability to focus anything that isn’t nearby. It’s due to an elongation of the eyeball. Many factors can contribute to this inappropriate elongation, and so the cause of nearsightedness is still under debate.

point     (in mathematics) A precise point in space that is so small that it has no size. It merely has an address.

retina     A layer at the back of the eyeball containing cells that are sensitive to light and that trigger nerve impulses that travel along the optic nerve to the brain, where a visual image is formed.

smartphone     A cell (or mobile) phone that can perform a host of functions, including search for information on the internet.