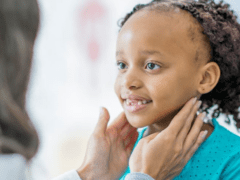 When your body fights an infection like the common cold, lymph nodes in your neck might swell as they make more germ-fighting white blood cells.

immune system    The collection of cells and their responses that help the body fight off infections and deal with foreign substances that may provoke allergies.

liquid     A material that flows freely but keeps a constant volume, like water or oil.

lymph     A colorless fluid that bathes tissues in the body. It contains a type of white blood cells (lymphocytes) that help the body fight disease. This liquid drains from intercellular spaces to lymph vessels and eventually moves on into the bloodstream.

lymph nodes     Also known as lymph glands, these are mall nodules located in the armpits, groin and stomach. They are part of the lymph system. They produce white blood cells that the body uses to fight infection. They also serve as a storage place for some other cells in the immune system.

lymphocyte     A type of white blood cell that is used by the immune system. These cells are made by the bone marrow. There are two main types. B lymphocytes make antibodies.T lymphocytes help kill cancer cells and help control how the immune system responds to threats by invaders (bacteria and viruses, for instance) or certain pollutants, drugs and other substances considered “foreign” (as in not made by the body).

measles     A highly contagious disease, typically striking children. Symptoms include a characteristic rash across the body, headaches, runny nose, and coughing. Some people also develop pinkeye, a swelling of the brain (which can cause brain damage) and pneumonia. Both of the latter two complications can lead to death. Fortunately, since the middle 1960s there has been a vaccine to dramatically cut the risk of infection.

microscopic     An adjective for things too small to be seen by the unaided eye. It takes a microscope to view objects this small, such as bacteria or other one-celled organisms.

plasma     (in chemistry and physics) A gaseous state of matter in which electrons separate from the atom. A plasma includes both positively and negatively charged particles. (in medicine) The colorless fluid part of blood.

spleen     An organ in the upper left abdomen, not far from the stomach, and protected by the rib cage. Among its many roles, it can filter foreign substances from the blood and can take blood cells out of vessels when the cells become too old. It also can store certain blood constituents, such as platelets and white blood cells.

tonsils     Short for palatine tonsils. This is a pair of soft tissues at the back of the throat. They are part of the immune system, which can help to fight infections. Many people get infected tonsils removed, however, and seem no more vulnerable to infection afterward. The tonsils’ structure somewhat resembles that of lymph nodes. The tonsils’ outer pink cover is similar to that of the mouth’s lining.

waste     Any materials that are left over from biological or other systems that have no value, so they can be disposed of as trash or recycled for some new use.