Science News for Students: New Success in Treating Allergies to Peanuts and Other Foods 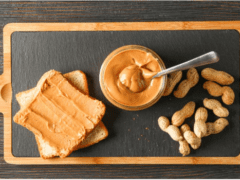 Many children love peanuts and the “butter” made from them. But for some people allergic to these legumes, it can take less than a third of a peanut (or its equivalent) to trigger a dangerous allergic reaction.

allergen: A substance that causes an allergic reaction.

allergy: The inappropriate reaction by the body’s immune system to a normally harmless substance. Untreated, a particularly severe reaction can lead to death.

anaphylaxis: (adj. anaphylactic) A severe — and potentially life-threatening — allergic reaction felt by the whole body. It is triggered by the immune system’s reaction to an allergen.

antibody: Any of a large number of proteins that the body produces from B cells and releases into the blood supply as part of its immune response. The production of antibodies is triggered when the body encounters an antigen, some foreign material. Antibodies then lock onto antigens as a first step in disabling the germs or other foreign substances that were the source of those antigens.

application: A particular use or function of something.

bacteria: (singular: bacterium) Single-celled organisms. These dwell nearly everywhere on Earth, from the bottom of the sea to inside other living organisms (such as plants and animals). Bacteria are one of the three domains of life on Earth.

cell: The smallest structural and functional unit of an organism. Typically too small to see with the unaided eye, it consists of a watery fluid surrounded by a membrane or wall. Depending on their size, animals are made of anywhere from thousands to trillions of cells. Most organisms, such as yeasts, molds, bacteria and some algae, are composed of only one cell.

chemical: A substance formed from two or more atoms that unite (bond) in a fixed proportion and structure. For example, water is a chemical made when two hydrogen atoms bond to one oxygen atom. Its chemical formula is H2O. Chemical also can be an adjective to describe properties of materials that are the result of various reactions between different compounds.

clinical: (in medicine) A term that refers to diagnoses, treatments or experiments involving people.

emergency room: Also known as the ER. It’s that part of the hospital where doctors initially attend to the immediate medical needs of accident victims and others who need critical care.

epinephrine: A type of stress hormone, commonly called adrenaline, that is secreted by the adrenal glands. It constricts blood vessels. It also increases the force and rate at which the heart contracts.

Food and Drug Administration (or FDA): A part of the U.S. Department of Health and Human Services, FDA is charged with overseeing the safety of many products. For instance, it is responsible for making sure drugs are properly labeled, safe and effective; that cosmetics and food supplements are safe and properly labeled; and that tobacco products are regulated.

gastrointestinal tract: The organs — basically the stomach and intestines — that break down and absorb the nutrients needed by the body.

generation: A group of individuals (in any species) born at about the same time or that are regarded as a single group. Your parents belong to one generation of your family, for example, and your grandparents to another. Similarly, you and everyone within a few years of your age across the planet are referred to as belonging to a particular generation of humans.

gut: An informal term for the gastrointestinal tract, especially the intestines.

high school: A designation for grades nine through 12 in the U.S. system of compulsory public education. High-school graduates may apply to colleges for further, advanced education.

immune: (adj.) Having to do with the immunity. (v.) Able to ward off a particular infection. Alternatively, this term can be used to mean an organism shows no impacts from exposure to a particular poison or process. More generally, the term may signal that something cannot be hurt by a particular drug, disease or chemical.

immune system: The collection of cells and their responses that help the body fight off infections and deal with foreign substances that may provoke allergies.

immunity: The ability of an organism to resist a particular infection or poison by providing cells to remove, kill or disarm the dangerous substance or infectious germ. Or, when used colloquially, it means the ability to avoid some other type of adverse impact (such as firing from a job or being bullied).

immunology: The field of biomedicine that deals with the immune system. A doctor or scientist who works in that field is known as an immunologist.

muscle: A type of tissue used to produce movement by contracting its cells, known as muscle fibers. Muscle is rich in protein, which is why predatory species seek prey containing lots of this tissue.

network: A group of interconnected people or things. (v.) The act of connecting with other people who work in a given area or do similar thing (such as artists, business leaders or medical-support groups), often by going to gatherings where such people would be expected, and then chatting them up. (n. networking)

nut: (in biology) The edible seed of a plant, which is usually encased in a hard protective shell.

oral: An adjective that refers to things in or affecting the mouth.

pathogen: An organism that causes disease.

pediatrics: A field of medicine that has to do with children and especially child health. A doctor who works in this field is known as a pediatrician.

placebo: A substance that has no therapeutic effect, used as a control in testing new drugs.

pollen: Powdery grains released by the male parts of flowers that can fertilize the female tissue in other flowers. Pollinating insects, such as bees, often pick up pollen that will later be eaten.

protein: A compound made from one or more long chains of amino acids. Proteins are an essential part of all living organisms. They form the basis of living cells, muscle and tissues; they also do the work inside of cells. Among the better-known, stand-alone proteins are the hemoglobin (in blood) and the antibodies (also in blood) that attempt to fight infections. Medicines frequently work by latching onto proteins.

side effects: Unintended problems or harm caused by a procedure or treatment.

sinus: Air-filled cavities (known as sinus cavities) around the nose and eyes. The tissue lining the sinuses makes mucus. It collects foreign materials and helps it drain into the nose. A painful inflammation of these tissues is known as sinusitis, which can create intense facial pressure and headaches around the cheeks and eyes.

stress: (in biology) A factor — such as unusual temperatures, movements, moisture or pollution — that affects the health of a species or ecosystem. (in psychology) A mental, physical, emotional or behavioral reaction to an event or circumstance (stressor) that disturbs a person or animal’s usual state of being or places increased demands on a person or animal; psychological stress can be either positive or negative.

threshold: A lower limit; or the lowest level at which something occurs.

Twitter: An online social network that allows users to post messages containing no more than 280 characters (until November 2017, the limit had been just 140 characters).

vigilance: The act of being intensely observant and careful.

virus: Tiny infectious particles consisting of RNA or DNA surrounded by protein. Viruses can reproduce only by injecting their genetic material into the cells of living creatures. Although scientists frequently refer to viruses as live or dead, in fact no virus is truly alive. It doesn’t eat like animals do, or make its own food the way plants do. It must hijack the cellular machinery of a living cell in order to survive.

wheezing: (v. wheeze) Chest sounds associated with labored breathing. They can sound like a whistling or rattling, and develop when something obstructs some of the air passages.