Science News for Students: New Risk From Too Much Screentime 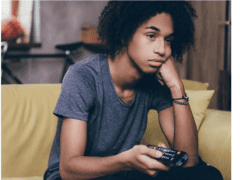 Teens — and everyone else, it seems — spend an unhealthy amount of time sitting, a new survey finds

anxiety     A nervous reaction to events causing excessive uneasiness and apprehension. People with anxiety may even develop panic attacks.

app     Short for application, or a computer program designed for a specific task.

depression     (in medicine) A mental illness characterized by persistent sadness and apathy. Although these feelings can be triggered by events, such as the death of a loved one or the move to a new city, that isn’t typically considered an “illness” — unless the symptoms are prolonged and harm an individual’s ability to perform normal daily tasks (such as working, sleeping or interacting with others).

stress     (in psychology) A mental, physical, emotional or behavioral reaction to an event or circumstance (stressor) that disturbs a person or animal’s usual state of being or places increased demands on a person or animal; psychological stress can be either positive or negative.

survey     To view, examine, measure or evaluate something, often land or broad aspects of a landscape. (with people) To ask questions that glean data on the opinions, practices (such as dining or sleeping habits), knowledge or skills of a broad range of people. Researchers select the number and types of people questioned in hopes that the answers these individuals give will be representative of others who are their age, belong to the same ethnic group or live in the same region. (n.) The list of questions that will be offered to glean those data.

unique     Something that is unlike anything else; the only one of its kind.