Science News for Students: Measles Can Harm a Child’s Defense Against Other Serious Infections 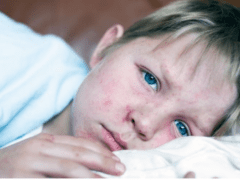 A measles infection can bring a rash, fever, cough and sore eyes. Other impacts of the virus, though, can last years after those initial symptoms are gone, scientists are finding.

allergy     The inappropriate reaction by the body’s immune system to a normally harmless substance. Untreated, a particularly severe reaction can lead to death.

benign     Not harmful to one’s health. Malignant, in contrast, means harmful and generally refers to cancer.

cell     The smallest structural and functional unit of an organism. Typically too small to see with the unaided eye, it consists of a watery fluid surrounded by a membrane or wall. Depending on their size, animals are made of anywhere from thousands to trillions of cells.

diarrhea     (adj. diarrheal) Loose, watery stool (feces) that can be a symptom of many types of microbial infections affecting the gut.

lymph     A colorless fluid produced by lymph glands. This secretion, which contains white blood cells, bathes the tissues and eventually drains into the bloodstream.

marrow     (in physiology and medicine) Spongy tissue that develops inside of bones. Most red blood cells, infection-fighting white blood cells and blood platelets form within the marrow.

measles     A highly contagious disease, typically striking children. Symptoms include a characteristic rash across the body, headaches, runny nose, and coughing. Some people also develop pinkeye, a swelling of the brain (which can cause brain damage) and pneumonia. Both of the latter two complications can lead to death. Fortunately, since the middle 1960s there has been a vaccine to dramatically cut the risk of infection.

particle     A minute amount of something.

pathogen     An organism that causes disease.

pathologist     Someone who studies disease and how it affects people or other infected organisms.

pneumonia     A lung disease in which infection by a virus or bacterium causes inflammation and tissue damage. Sometimes the lungs fill with fluid or mucus. Symptoms include fever, chills, cough and trouble breathing.

protein     A compound made from one or more long chains of amino acids. Proteins are an essential part of all living organisms. They form the basis of living cells, muscle and tissues; they also do the work inside of cells. Among the better-known, stand-alone proteins are the hemoglobin (in blood) and the antibodies (also in blood) that attempt to fight infections. Medicines frequently work by latching onto proteins.

resilient     (n. resilience) To be able to recover fairly quickly from obstacles or difficult conditions.

respiratory tract     Parts of the body involved in breathing (also called the respiratory system). It includes the lungs, nose, sinuses, throat and other large airways.

sibling     An offspring that shares the same parents (with its brother or sister).

T cells     A family of white blood cells, also known as lymphocytes, that are primary actors in the immune system. They fight disease and can help the body deal with harmful substances.

tonsils     Short for palatine tonsils. This is a pair of soft tissues at the back of the throat. They are part of the immune system, which can help to fight infections. Many people get infected tonsils removed, however, and seem no more vulnerable to infection afterward.

tract     A particular, well-defined area. For instance, important parts of an animal’s body will include its respiratory tract (lungs and airways), reproductive tract (gonads and hormone systems important to reproduction) and gastro-intestinal tract (the stomach and intestines — or organs responsible for moving food, digesting it, absorbing it and eliminating wastes).

United Kingdom     Land encompassing the four “countries” of England, Scotland, Wales and Northern Ireland. More than 80 percent of the United Kingdom’s inhabitants live in England. Many people — including U.K. residents — argue whether the United Kingdom is a country or instead a confederation of four separate countries. The United Nations and most foreign governments treat the United Kingdom as a single nation.

vaccine     (v. vaccinate) A biological mixture that resembles a disease-causing agent. It is given to help the body create immunity to a particular disease. The injections used to administer most vaccines are known as vaccinations.

virologist     A researcher who studies viruses and the diseases they cause.