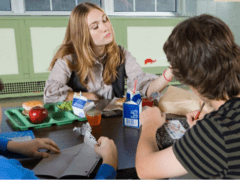 For many kids with food allergies, navigating school and life to avoid allergens can take an emotional toll.

allergy: The inappropriate reaction by the body’s immune system to a normally harmless substance. Untreated, a particularly severe reaction can lead to death.

anxiety: A nervous reaction to events causing excessive uneasiness and apprehension. People with anxiety may even develop panic attacks.

anxious: (n. anxiety) A feeling of dread over some potential or upcoming situation, usually one over which someone feels he has little control.

epinephrine: A type of stress hormone, commonly called adrenaline, that is secreted by the adrenal glands. It constricts blood vessels. It also increases the force and rate at which the heart contracts.

high school: A designation for grades nine through 12 in the U.S. system of compulsory public education. High-school graduates may apply to colleges for further, advanced education.

nut: (in biology) The edible seed of a plant, which is usually encased in a hard protective shell. (in construction) A fastener with a threaded hole. They typically are used along with a bolt to securely hold the surfaces of two things together.

social: (adj.) Relating to gatherings of people; a term for animals (or people) that prefer to exist in groups. (noun) A gathering of people, for instance those who belong to a club or other organization, for the purpose of enjoying each other’s company.

stress: (in biology) A factor — such as unusual temperatures, movements, moisture or pollution — that affects the health of a species or ecosystem. (in psychology) A mental, physical, emotional or behavioral reaction to an event or circumstance (stressor) that disturbs a person or animal’s usual state of being or places increased demands on a person or animal; psychological stress can be either positive or negative.