Science News for Students: Explainer - What is Ultrasound? 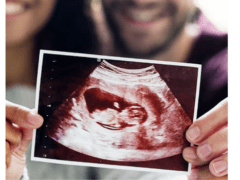 Although beyond human hearing, these sound waves can perform important tasks, especially in medicine

Ultrasound produces images of babies in the womb. It’s typically one of the first health checks for baby and mom.

audible     Something that can be heard, usually with ears or other sound-sensing structures.

disorder     (in medicine) A condition where the body does not work appropriately, leading to what might be viewed as an illness. This term can sometimes be used interchangeably with disease.

hertz     The frequency with which something (such as a wavelength) occurs, measured in the number of times the cycle repeats during each second of time.

infrasound     Sound waves with frequencies below the lower limit of human hearing.

insulin     A hormone produced in the pancreas (an organ that is part of the digestive system) that helps the body use glucose as fuel.

kidney     Each in a pair of organs in mammals that filters blood and produces urine.

mineral     Crystal-forming substances that make up rock, such as quartz, apatite or various carbonates. Most rocks contain several different minerals mish-mashed together. A mineral usually is solid and stable at room temperatures and has a specific formula, or recipe (with atoms occurring in certain proportions) and a specific crystalline structure (meaning that its atoms are organized in regular three-dimensional patterns).

mineral deposit     A natural concentration of a specific mineral or metal

pitch     (in acoustics) The word musicians use for sound frequency. It describes how high or low a sound is, which will be determined by the vibrations that created that sound.

prospect     (n.) The vista (as in what’s in view) or the future of something (such as whether it’s going to be successful).

software     The mathematical instructions that direct a computer’s hardware, including its processor, to perform certain operations.

sonar     A system for the detection of objects and for measuring the depth of water. It works by emitting sound pulses and measuring how long it takes the echoes to return.

threshold     A lower limit; or the lowest level at which something occurs.

trough     (in physics) the bottom or low point in a wave.

ultrasound     (adj. ultrasonic) Sounds at frequencies above the range that can be detected by the human ear. Also the name given to a medical procedure that uses ultrasound to “see” within the body.

vibrate     To rhythmically shake or to move continuously and rapidly back and forth.

wave     A disturbance or variation that travels through space and matter in a regular, oscillating fashion.

wavelength     The distance between one peak and the next in a series of waves, or the distance between one trough and the next. It’s also one of the “yardsticks” used to measure radiation. Visible light — which, like all electromagnetic radiation, travels in waves — includes wavelengths between about 380 nanometers (violet) and about 740 nanometers (red). Radiation with wavelengths shorter than visible light includes gamma rays, X-rays and ultraviolet light. Longer-wavelength radiation includes infrared light, microwaves and radio waves.

womb     Another name for the uterus, the organ in mammals in which a fetus grows and matures in preparation for birth.