Science News for Students: Explainer - What are Allergies? 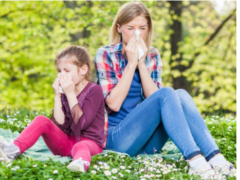 Many people develop runny noses, teary eyes or rashes upon exposure to molds, pollen, pet dander and a host of other materials — even foods.

activate: (in biology) To turn on, as with a gene or chemical reaction.

anaphylaxis: (adj. anaphylactic) A severe — and potentially life-threatening — allergic reaction felt by the whole body. It is triggered by the immune system’s reaction to an allergen.

antibodies: Any of a large number of proteins that the body produces from B cells and releases into the blood supply as part of its immune response. The production of antibodies is triggered when the body encounters an antigen, some foreign material. Antibodies then lock onto antigens as a first step in disabling the germs or other foreign substances that were the source of those antigens.

asthma: A disease affecting the body’s airways, which are the tubes through which animals breathe. Asthma obstructs these airways through swelling, the production of too much mucus or a tightening of the tubes. As a result, the body can expand to breathe in air, but loses the ability to exhale appropriately. The most common cause of asthma is an allergy. Asthma is a leading cause of hospitalization and the top chronic disease responsible for kids missing school.

bacterial: Having to do with bacteria, single-celled organisms. These dwell nearly everywhere on Earth, from the bottom of the sea to inside animals.

cell: The smallest structural and functional unit of an organism. Typically too small to see with the unaided eye, it consists of a watery fluid surrounded by a membrane or wall. Depending on their size, animals are made of anywhere from thousands to trillions of cells. Most organisms, such as yeasts, molds, bacteria and some algae, are composed of only one cell.

chemical: A substance formed from two or more atoms that unite (bond) in a fixed proportion and structure. For example, water is a chemical made when two hydrogen atoms bond to one oxygen atom. Its chemical formula is H2O. Chemical also can be an adjective to describe properties of materials that are the result of various reactions between different compounds.

component: Something that is part of something else (such as pieces that go on an electronic circuit board or ingredients that go into a cookie recipe).

dander: Flakes of skin in an animal’s fur or hair.

diarrhea: (adj. diarrheal) Loose, watery stool (feces) that can be a symptom of many types of microbial infections affecting the gut.

flu: Short for influenza, a highly contagious viral infection of the respiratory passages. It can cause fever and severe aching. It often occurs as an epidemic.

germ: Any one-celled microorganism, such as a bacterium or fungal species, or a virus particle. Some germs cause disease. Others can promote the health of more complex organisms, including birds and mammals. The health effects of most germs, however, remain unknown.

gut: An informal term for the gastrointestinal tract, especially the intestines.

host:  (in biology and medicine) The organism (or environment) in which some other thing resides. Humans may be a temporary host for food-poisoning germs or other infective agents.

immune: (adj.) Having to do with the immunity. (v.) Able to ward off a particular infection. Alternatively, this term can be used to mean an organism shows no impacts from exposure to a particular poison or process. More generally, the term may signal that something cannot be hurt by a particular drug, disease or chemical.

immune system: The collection of cells and their responses that help the body fight off infections and deal with foreign substances that may provoke allergies.

immunology: The field of biomedicine that deals with the immune system. A doctor or scientist who works in that field is known as an immunologist.

infection: A disease that can spread from one organism to another. It’s usually caused by some type of germ.

inflammation: (adj. inflammatory) The body’s response to cellular injury and obesity; it often involves swelling, redness, heat and pain. It also is an underlying feature responsible for the development and aggravation of many diseases, especially heart disease and diabetes.

organism: Any living thing, from elephants and plants to bacteria and other types of single-celled life.

parasite: An organism that gets benefits from another species, called a host, but doesn’t provide that host any benefits. Classic examples of parasites include ticks, fleas and tapeworms.

pollen: Powdery grains released by the male parts of flowers that can fertilize the female tissue in other flowers. Pollinating insects, such as bees, often pick up pollen that will later be eaten.

sinus: Air-filled cavities (known as sinus cavities) around the nose and eyes. The tissue lining the sinuses makes mucus. It collects foreign materials and helps it drain into the nose. A painful inflammation of these tissues is known as sinusitis, which can create intense facial pressure and headaches around the cheeks and eyes.