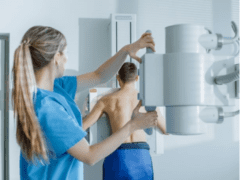 ‌The lead ‘aprons’ used may not offer much protection and could degrade imaging quality, they say

Radiation experts are now talking about ending the practice of using such protective shielding.

3-D: Short for three-dimensional. This term is an adjective for something that has features that can be described in three dimensions — height, width and length.

annual: Adjective for something that happens every year. (in botany) A plant that lives only one year, so it usually has a showy flower and produces many seeds.

biologist: A scientist involved in the study of living things.

component: Something that is part of something else (such as pieces that go on an electronic circuit board or ingredients that go into a cookie recipe).

CT scan: (Also known as a CAT scan). The term is short for computerized axial tomography. It is a special type of X-ray scanning technology that produces cross-sectional views of the inside of a bone or body.

fetus: (Adj. fetal ) The term for a mammal or other large animal during its later-stages of development in the womb. For humans, this term is usually applied after the eighth week of development.

Food and Drug Administration: (or FDA) A part of the U.S. Department of Health and Human Services, FDA is charged with overseeing the safety of many products. For instance, it is responsible for making sure drugs are properly labeled, safe and effective; that cosmetics and food supplements are safe and properly labeled; and that tobacco products are regulated.

fruit flies: Tiny flies belonging to the species Drosophila melanogaster. Scientists often use these short-lived animals as a “guinea pig” for lab studies because they are easy to grow, can mature into adults in a short time and their bodies share many of the same traits and responses as more complex animals — including mammals.

Great Britain: The collective name for England, Scotland, Wales and their associated islands. This is not the same as the United Kingdom, which is the combination of Great Britain and Northern Ireland.

lead:  A toxic heavy metal (abbreviated as Pb) that in the body moves to where calcium wants to go (such as bones and teeth). The metal is particularly toxic to the brain. In a child’s developing brain, it can permanently impair IQ, even at relatively low levels.

mutation: (v. mutate) Some change that occurs to a gene in an organism’s DNA. Some mutations occur naturally. Others can be triggered by outside factors, such as pollution, radiation, medicines or something in the diet. A gene with this change is referred to as a mutant.

ovary: (in animals) A female reproductive organ that produces eggs and that secretes some of the hormones needed to regulate the development of secondary sex-related traits (such as breast development in human females). Most female mammals have a pair of ovaries.

pediatrics: A field of medicine that has to do with children and especially child health. A doctor who works in this field is known as a pediatrician.

physicist: A scientist who studies the nature and properties of matter and energy.

policy: A plan, stated guidelines or agreed-upon rules of action to apply in certain specific circumstances. For instance, a school could have a policy on when to permit snow days or how many excused absences it would allow a student in a given year.

psychological: An adjective that refers to how the human mind works, especially in relation to guiding actions and behavior.

radiology: The science dealing with X-rays and other high-energy radiation, especially the use of such radiation for the diagnosis and treatment of disease.

reproductive organs: The organs in a creature’s body that allows it to make and deliver eggs or sperm, and where appropriate, to nurture developing eggs and fetuses.

thyroid: A gland in the neck that releases hormones, which play a pivotal role in directing development and metabolism (the use of food as fuel). The gland is relatively small, with two lobes separated by a bridge-like structure. Some therefore refer to its shape as resembling a butterfly.

tissue: Made of cells, it is any of the distinct types of materials that make up animals, plants or fungi. Cells within a tissue work as a unit to perform a particular function in living organisms. Different organs of the human body, for instance, often are made from many different types of tissues.

X-ray: A type of radiation analogous to gamma rays, but having somewhat lower energy.