Science News for Students: Don't Snooze on Getting Enough Sleep 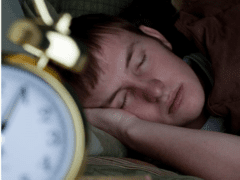 Teens need between 8 and 10 hours of sleep each night, although most don’t get it.

adolescent     Someone in that transitional stage of physical and psychological development that begins at the onset of puberty, typically between the ages of 11 and 13, and ends with adulthood.

anxiety     A nervous reaction to events causing excessive uneasiness and apprehension. People with anxiety may even develop panic attacks.

anxious     (n. anxiety) A feeling of dread over some potential or upcoming situation, usually one over which someone feels he has little control.

body mass index     (BMI) A person’s weight in kilograms divided by the square of his or her height in meters. BMI can be used to evaluate if someone is overweight or obese. However, because BMI does not account for how much muscle or fat a person has, it is not a precise measure.

calorie     The amount of energy needed to raise the temperature of 1 gram of water by 1 degree Celsius. It is typically used as a measurement of the energy contained in some defined amount of food. The exception: when referring to the energy in food, the convention is to call a kilocalorie, or 1,000 of these calories, a “calorie.” Here, a food calorie is the amount of energy needed to raise 1 kilogram of water 1 degree C.

circadian rhythm     Biological functions such as body temperature and sleeping/waking times that operate on a roughly 24-hour cycle.

diet     The foods and liquids ingested by an animal to provide the nutrition it needs to grow and maintain health. (verb) To adopt a specific food-intake plan for the purpose of controlling body weight.

epidemiologist     Like health detectives, these researchers figure out what causes a particular illness and how to limit its spread.

fatigue     The feeling of being tired, listless or short on energy.

ghrelin     Known primarily as the “hunger” hormone, it is produced by the gut and pancreas to signal when the body needs to eat. It also plays a role in triggering the release of growth hormone. People who cut back on calories often produce excess quantifies of ghrelin — essentially the body’s automatic attempt to avoid what it senses may be the beginning of starvation.

hormone     (in zoology and medicine) A chemical produced in a gland and then carried in the bloodstream to another part of the body. Hormones control many important body activities, such as growth. Hormones act by triggering or regulating chemical reactions in the body.

leptin     A type of hormone made by fat cells that inhibits hunger.

link     A connection between two people or things.

mental health     A term for someone’s emotional, psychological and social well-being. It refers to how people behave on their own and how they interact with others. It includes how people make choices, handle stress and manage fear or anxiety. Poor mental health can be triggered by disease or merely reflect a short-term response to life’s challenges. It can occur in people of any age, from babies to the elderly.

nutrient     A vitamin, mineral, fat, carbohydrate or protein that a plant, animal or other organism requires as part of its food in order to survive.

overweight     A medical condition where the body has accumulated too much body fat. People are not considered overweight if they weigh more than is normal for their age and height, but that extra weight comes from bone or muscle.

peer     (noun) Someone who is an equal, based on age, education, status, training or some other features. (verb) To look into something, searching for details.

puberty     A developmental period in humans and other primates when the body undergoes hormonal changes that will result in the maturation of reproductive organs.

standardized test     A test that is administered and scored in the same way for all students and usually is given to large populations of students (not just to individual classes). Schools administer such tests in certain subjects regularly so that they can track how well their students are performing in those school subjects. The test may be given as a paper-and-pencil exam or on a computer.

stress     (in biology) A factor — such as unusual temperatures, movements, moisture or pollution — that affects the health of a species or ecosystem. (in psychology) A mental, physical, emotional or behavioral reaction to an event or circumstance (stressor) that disturbs a person or animal’s usual state of being or places increased demands on a person or animal; psychological stress can be either positive or negative. (in physics) Pressure or tension exerted on a material object.

stroke     (in biology and medicine) A condition where blood stops flowing to part of the brain or leaks in the brain.

texting     The sending of a text message from a mobile (cell) phone.

type 2 diabetes     A disease caused by the body’s inability to effectively use insulin, a hormone that helps the body process and use sugars. Unless diabetes is controlled, a person faces the risk of heart disease, coma or death.

vaccine     (v. vaccinate) A biological mixture that resembles a disease-causing agent. It is given to help the body create immunity to a particular disease. The injections used to administer most vaccines are known as vaccinations.