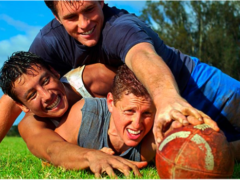 Sweating isn’t embarrassing, it’s a talent. It’s how the body cools itself. And humans are very, very good at it.

activate     (in biology) To turn on, as with a gene or chemical reaction.

amphetamine     A class of potent prescription drugs used to stimulate the nervous system. They work by altering levels of certain natural chemicals in the brain. Doctors prescribe these drugs to treat narcolepsy (a sleep problem), to boost nervous-system responses, to control symptoms in people with attention deficit hyperactivity disorder (ADHD), and sometimes to treat obese people for a few weeks as they start a reduced calorie diet and exercise program for weight loss.

analytical chemistry  A field that focuses on ways to separate materials into their parts or elements.

anthropology     The study of humankind. A social scientist who studies different societies and cultures is called an anthropologist.

antibody  Any of a large number of proteins that the body produces from B cells and releases into the blood supply as part of its immune response. The production of antibodies is triggered when the body encounters an antigen, some foreign material. Antibodies then lock onto antigens as a first step in disabling the germs or other foreign substances that were the source of those antigens.

ape     A group of rather large “Old World” primates that lack a tail. They include the gorilla, chimpanzees, bonobos, orangutans and gibbons.

biology     The study of living things. The scientists who study them are known as biologists.

blood vessel     A tubular structure that carries blood through the tissues and organs.

chemical     A substance formed from two or more atoms that unite (bond) in a fixed proportion and structure. For example, water is a chemical made when two hydrogen atoms bond to one oxygen atom. Its chemical formula is H2O. Chemical also can be an adjective used to describe properties of materials that are the result of various reactions between different compounds.

cocaine     A drug that is powerfully addictive. As a neural stimulant, it makes people’s hearts beat faster and gives them more energy focus. People can smoke, snort or inject cocaine. It is derived from the leaves of a coca plant.

coroner     A public official charged by the courts to oversee the review of data collected as part of the investigation into any suspicious deaths.

culture     (n. in social science) The sum total of typical behaviors and social practices of a related group of people (such as a tribe or nation). Their culture includes their beliefs, values and the symbols that they accept and/or use. Culture is passed on from generation to generation through learning. Scientists once thought culture to be exclusive to humans. Now they recognize some other animals show signs of culture as well, including dolphins and primates.

eccrine glands   These are sweat glands in mammalian skin that mainly secrete salty water. In mammals such as mice and cats, eccrine glands are on the pads of the feet. Their sweat helps these animals keep their grip on slippery surfaces. In humans, eccrine glands occur all over the body, and pump out sweat to help us cool our bodies.

engineer     A person who uses science to solve problems. As a verb, to engineer means to design a device, material or process that will solve some problem or unmet need.

evolution     (v. to evolve) A process by which species undergo changes over time, usually through genetic variation and natural selection. These changes usually result in a new type of organism better suited for its environment than the earlier type. The newer type is not necessarily more “advanced,” just better adapted to the particular conditions in which it developed. Or the term can refer to changes that occur as some natural progression within the non-living world (such as computer chips evolving to smaller devices which operate at an ever faster speed).

evolutionary biologist     Someone who studies the adaptive processes that have led to the diversity of life on Earth. These scientists can study many different subjects, including the microbiology and genetics of living organisms, how species change to adapt, and the fossil record (to assess how various ancient species are related to each other and to modern-day relatives).

fat     A natural oily or greasy substance occurring in plants and in animal bodies, especially when deposited as a layer under the skin or around certain organs. Fat’s primary role is as an energy reserve. Fat also is a vital nutrient, though it can be harmful if consumed in excessive amounts.

follicle     The cells and other tissues that surround hair at its root.

gland     A cell, a group of cells or an organ that produces and discharges a substance (or “secretion”) for use elsewhere in the body or in a body cavity, or for elimination from the body.

hypothalamus     A region of the brain that controls bodily functions by releasing hormones. The hypothalamus is involved in regulating appetite through release of appetite-suppressing hormones.

immunofluorescence     A technique that relies on an antibody to find and latch onto some target. Scientists design the antibodies, which are small molecules produced by the immune system, to bind to a desired drug or cell. The antibodies also can bind to another chemical, one that will glow if the antibodies latch on. After releasing the antibodies into a substance along with the extra chemical, the scientists measure how much of a telltale glow is present. The lower it is, the more of the target drug or cell is present.

induce     To produce or cause something to happen. In physics, electromagnetic induction is the production of electricity with varying magnetic fields.

iontophoresis      A method used to transport chemicals across the skin by applying a small electrical current.

macaque     A monkey with cheek pouches and a short tail that lives mainly in the forest.

mammal     A warm-blooded animal distinguished by the possession of hair or fur, the secretion of milk by females for feeding their young, and (typically) the bearing of live young.

manufacturing     The making of things, usually on a large scale.

marijuana     A mind-altering drug. It is made from the leaves (and sometimes stems or seeds) of the Cannabis sativa plant. This drug also goes by the colloquial terms pot and weed.

mechanism     The steps or process by which something happens or “works.” It may be the spring that pops something from one hole into another. It could be the squeezing of the heart muscle that pumps blood throughout the body. It could be the friction (with the road and air) that slows down the speed of a coasting car. Researchers often look for the mechanism behind actions and reactions to understand how something functions.

metabolite     Some chemical that is essential to metabolism or that is formed during the process of metabolism.

monitor     To test, sample or watch something, especially on a regular or ongoing basis.

nerve     A long, delicate fiber that transmits signals across the body of an animal. An animal’s backbone contains many nerves, some of which control the movement of its legs or fins, and some of which convey sensations such as hot, cold or pain.

personalized medicine     Medical treatment (including novel drugs or other therapies) that has been chosen or developed to meet the particular needs of an individual, based on that person’s genes, medical history, behaviors, sex or more traits. It comes from the idea that people are different, so “one size does not fill all.”

primate     The order of mammals that includes humans, apes, monkeys and related animals (such as tarsiers, the Daubentonia and other lemurs).

salt     A compound made by combining an acid with a base (in a reaction that also creates water).

sebaceous glands     Structures in the skin that secrete oil. That oil can waterproof the skin and keep it from drying out.

secrete     (noun: secretion) The natural release of some liquid substance — such as hormones, an oil or saliva — often by an organ of the body.

sensor     A device that picks up information on physical or chemical conditions — such as temperature, barometric pressure, salinity, humidity, pH, light intensity or radiation — and stores or broadcasts that information. Scientists and engineers often rely on sensors to inform them of conditions that may change over time or that exist far from where a researcher can measure them directly.

species     A group of similar organisms capable of producing offspring that can survive and reproduce.

stroke     (in biology and medicine) A condition where blood stops flowing to part of the brain or leaks in the brain.

toxicology     The branch of science that probes poisons and how they disrupt the health of people and other organisms. Scientists who work in this field are called toxicologists.