Science News for Students: Concussions Leave Clues In The Blood 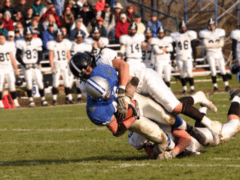 cell: The smallest structural and functional unit of an organism. Typically too small to see with the unaided eye, it consists of a watery fluid surrounded by a membrane or wall. Depending on their size, animals are made of anywhere from thousands to trillions of cells.

concussion: Temporary unconsciousness, or headache, dizziness or forgetfulness due to a severe blow to the head.

diagnose: To analyze clues or symptoms in the search for their cause. The conclusion usually results in a diagnosis — identification of the causal problem or disease.

factor: Something that plays a role in a particular condition or event; a contributor.

marker: (in biomedicine) The presence of some substance that usually can only be present because it signals some disease, pollutant or event (such as the attachment of some stain or molecular flag). As such, this substance will serve as a sign — or marker — of that related thing.

nerve: A long, delicate fiber that transmits signals across the body of an animal. An animal’s backbone contains many nerves, some of which control the movement of its legs or fins, and some of which convey sensations such as hot, cold or pain.

neurologist: Medical doctors who do research on the anatomy and function of the brain and nerves. Researchers with a PhD who do similar work are known as neuroscientists.

protein: A compound made from one or more long chains of amino acids. Proteins are an essential part of all living organisms. They form the basis of living cells, muscle and tissues; they also do the work inside of cells. Among the better-known, stand-alone proteins are the hemoglobin (in blood) and the antibodies (also in blood) that attempt to fight infections. Medicines frequently work by latching onto proteins.

transmit: (n. transmission) To send or pass along.