Science News for Students: Climage Change May Be Aiding a Deadly Fungus in Infecting Humans 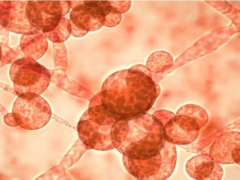 A fungus called Candida auris can cause deadly infections in people.

antifungal     Having properties that prevent or limit the growth of fungi.

bat     A type of winged mammal comprising more than 1,100 separate species — or one in every four known species of mammal.

Candida     A genus of yeasts that are ubiquitous across the globe. More than 20 species have been linked to disease in people and animals.

climate     The weather conditions that typically exist in one area, in general, or over a long period.

climate change     Long-term, significant change in the climate of Earth. It can happen naturally or in response to human activities, including the burning of fossil fuels and clearing of forests.

continent     (in geology) The huge land masses that sit upon tectonic plates. In modern times, there are six established geologic continents: North America, South America, Eurasia, Africa, Australia and Antarctica. In 2017, scientists also made the case for yet another: Zealandia.

defense     (in biology) A natural protective action taken or chemical response that occurs when a species confront predators or agents that might harm it. (adj. defensive)

environment     The sum of all of the things that exist around some organism or the process and the condition those things create. Environment may refer to the weather and ecosystem in which some animal lives, or, perhaps, the temperature and humidity (or even the placement of things in the vicinity of an item of interest).

evolve     (adj. evolving) To change gradually over generations, or a long period of time. In living organisms, such an evolution usually involves random changes to genes that will then be passed along to an individual’s offspring. These can lead to new traits, such as altered coloration, new susceptibility to disease or protection from it, or different shaped features (such as legs, antennae, toes or internal organs). Nonliving things may also be described as evolving if they change over time. For instance, the miniaturization of computers is sometimes described as these devices evolving to smaller, more complex devices.

fungus     (plural: fungi) One of a group of single- or multiple-celled organisms that reproduce via spores and feed on living or decaying organic matter. Examples include mold, yeasts and mushrooms.

genetic     Having to do with chromosomes, DNA and the genes contained within DNA. The field of science dealing with these biological instructions is known as genetics. People who work in this field are geneticists.

hibernation     A state of inactivity that some animals enter to save energy at certain times of year. Bears and bats, for example, may hibernate through the winter. During this time, the animal does not move very much, and the use of energy by its body slows down. This eliminates the need to feed for months at a time.

mammal     A warm-blooded animal distinguished by the possession of hair or fur, the secretion of milk by females for feeding their young, and (typically) the bearing of live young.

microbiology     The study of microorganisms, principally bacteria, fungi and viruses. Scientists who study microbes and the infections they can cause or ways that they can interact with their environment are known as microbiologists.

replicate     (in biology) To copy something. When viruses make new copies of themselves — essentially reproducing — this process is called replication. (in experimentation) To copy an earlier test or experiment — often an earlier test performed by someone else — and get the same general result. Replication depends upon repeating every step of a test, one by one. If a repeated experiment generates the same result as in earlier trials, scientists view this as verifying that the initial result is reliable. If results differ, the initial findings may fall into doubt. Generally, a scientific finding is not fully accepted as being real or true without replication.

species     A group of similar organisms capable of producing offspring that can survive and reproduce.

syndrome     Two or more symptoms that together characterize a particular disease, disorder or social condition.

thermal     Of or relating to heat. (in meteorology) A relatively small-scale, rising air current produced when Earth’s surface is heated. Thermals are a common source of low level turbulence for aircraft.

white nose syndrome     A fungal disease affecting bats. The fungus, Pseudogymnoascus destructans, lives in caves where bats hibernate through the winter. It causes a white dusting on their noses and on other areas of the body. The fungus causes dehydration and can eat holes through bats’ wings and blood vessels. Eventually, it weakens them, leaving them unable to fly and find food.