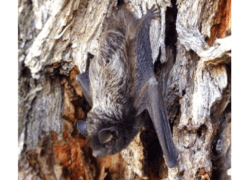 Rates of disease are quite low and, unlike elsewhere, seldom due to dog bites

Since the 1950s, bats and other wild animals have replaced dogs as the major U.S. source of human deaths from rabies.

anxious     (n. anxiety) A feeling of dread over some potential or upcoming situation, usually one over which someone feels he has little control.

bat     A type of winged mammal comprising more than 1,100 separate species — or one in every four known species of mammal.

Centers for Disease Control and Prevention, or CDC     An agency of the U.S. Department of Health and Human Services, CDC is charged with protecting public health and safety by working to control and prevent disease, injury and disabilities. It does this by investigating disease outbreaks, tracking exposures by Americans to infections and toxic chemicals, and regularly surveying diet and other habits among a representative cross-section of all Americans.

coyote     This relatively long-legged member of the dog family (Canis latrans) is sometimes referred to as the prairie wolf. It is, however, notably smaller and its build more scrawny than a true wolf. Found from Alaska down into Central America, coyotes have lately expanded their range into all 50 U.S. states. Many now hang out in urban areas where they have no predators and can easily dine on rodents and scavenge trashed food.

epidemiologist     Like health detectives, these researchers figure out what causes a particular illness and how to limit its spread.

infect     To spread a disease from one organism to another. This usually involves introducing some sort of disease-causing germ to an individual.

infection     (adj. infectious) A disease that can spread from one organism to another. It’s usually caused by some type of germ.

rabies     (adj. rabid) A virus that is transmitted from mammals such as bats, raccoons, skunks and dogs — sometimes to people. Rabies is found on every continent except Antarctica, and is spread by contact with the saliva of an infected host. A vaccine exists. Without a vaccination, nearly every infected person will die.

vector     (in medicine) An organism that can spread disease, such as by transmitting a germ from one host to another.

veterinary     Having to do with animal medicine or health care.