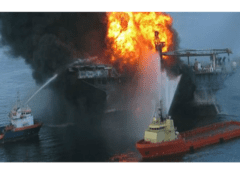 The Deepwater Horizon oil spill was a major ecological and economic disaster in the Gulf of Mexico.  Estimating how much oil leaked was a matter of debate among many different sources.

The exercises in this Kmz will present students with several methods to estimate the area of irregular regions.  Oil spill maps from NOAA are used as overlays in Google Earth in a series of problems.  With the use of grid lines of latitude and longitude, the areas of surface oil are estimated first as a rough estimate and then using Pick’s Theorem.  Links to information on offshore oil drilling are included in the file as well as a fabulous interactive widget from PBS NewsHour that calculates how much oil has leaked.  The file contains folders within folders.  Be sure to read the Teacher’s Notes download to correctly manage folders.

Additionally, a 3D SketchUp model of the Deepwater Horizon Oil Platform is included for instructional purposes.  A version of the model is included with the Google Earth file and appears in the Gulf of Mexico where the accident occurred.

The collection of lessons on this page are designed to target specific math concepts, often in real world settings and situations.