Outside Podcast: Getting Stung By the Nastiest Creatures on Earth 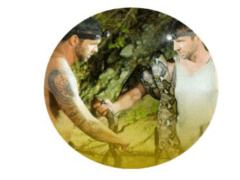 On the new History Channel show Kings of Pain, Rob “Caveman” Alleva and cohost Adam Thorn get bit and stung by the nastiest insects, reptiles, and fish on the planet—on purpose.

They’re following in the footsteps of entomologist Justin O. Schmidt, who Outside profiled back in the nineties while he was developing the first-of-its-kind pain scale for stinging insects. But for the TV show, Alleva and Thorn are pushing this brand of experimentation even further by subjecting themselves to the agony-inducing defense mechanisms of snakes, fish, and lizards, with sometimes horrifying results. Outside Podcast host Peter Frick-Wright wanted to know: What’s it like to be in so much pain, so often? And why were they willing to take this job?