Outside Podcast: What We Really Know About Life in Outer Space 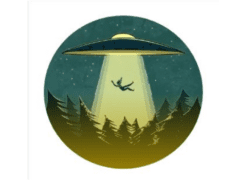 In recent years, the search for extraterrestrials has been accelerated by a wave of new technologies that allow us to better probe distant reaches of the galaxy.

Meanwhile, a pair of events have generated enormous excitement among those who believe that aliens might already be among us. In 2017, when the first interstellar object was detected in our solar system, a highly respected Harvard astrophysicist suggested it might be a probe that was sent by aliens. That same year, the public learned about a secret program by the U.S. military that was investigating potential threatening UFOs. All of this was enough to spur journalist Laura Krantz to launch an investigation of her own into what we really know about extraterrestrials. The result is a new season of Wild Thing, a podcast that explores the strange and unusual things that capture our imaginations. This week, we talk to Laura about the challenges of doing rigorous reporting on a topic that a lot of people don’t take seriously and share the kickoff episode of her otherworldly new series.