Outside Podcast: Bee Still My Heart 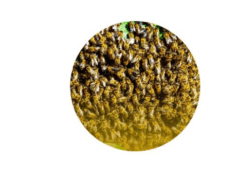 Bee venom is similar to a rattlesnake’s.

It rapidly disperses in your tissue, and when you’re stung, the pain you feel is a combination of proteins and peptides attacking your cell membranes. Each sting contains enough venom to incapacitate a small mouse, but bees won’t really hurt you unless you’re allergic. Or at least, that’s what you thought until you disturbed a hive of Africanized bees, which have been known to chase attackers for more than ten hours.