Outside Podcast: A Long-Shot Bid to Save the Monarch Butterfly 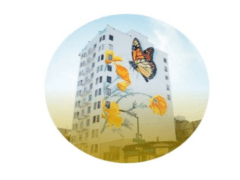 Conservationists hoping to protect a threatened wild species tend to take a standard set of actions.

These can involve political campaigns, lawsuits, and media outreach. But sometimes it’s the unexpected approaches that can make the difference. Over the past several years, artist Jane Kim has been creating large-scale public murals of the monarch butterfly, an insect that’s in a state of crisis. Recent surveys indicate the that the population of the western monarch in California has plummeted to below 30,000, down from 4.5 million in the mid-1980s. Kim’s latest work is a painting in San Francisco’s Tenderloin district that wraps three sides of a 13-story building and includes a 50-foot-tall monarch. It’s suddenly one of the most dramatic features in the city’s skyline. The question now is whether this extraordinary piece of public art will spur the actions needed to save the species—or become a tribute to a once beautiful butterfly.