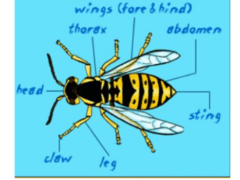 Wasps can live in hives of thousands, but did you know that most wasps are solitary? Get the facts.

Wasps may not be as big as lions or bears, but these insects are among the most successful predators on Earth!

Different wasps species have different ways of preying on other animals. Some wasps, called parasitoids, lay their eggs in the bodies of live insects (hosts). As the larva grows, it feeds on the host from the inside out! But humans have little to fear. Wasps are uninterested in people unless their nests are threatened. In fact, wasps prey on many of the insect pests that destroy crops, so they are ultimately beneficial to humans.