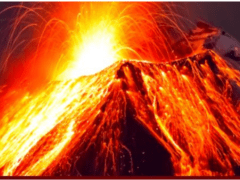 Find out what causes volcanoes to erupt and how scientists study them.

Some volcanoes explode with the force of an atomic bomb. Others spill rivers of gently flowing lava.

What causes volcanoes to erupt? How do scientists study them? Let’s explore one of the most powerful, destructive volcanic eruptions in history.