OLogy: The Ancient City of Petra 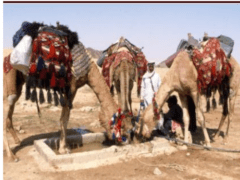 Petra was founded over 2000 years ago along the ancient trade routes between Arabia, Egypt, and the Mediterranean Sea. As a center for trade, the capital became very wealthy and powerful. The busy city was bustling with life, full of lush gardens, ornate houses, and markets loaded with exotic goods from India, Arabia, and Egypt.