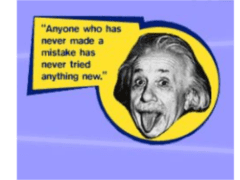 Einstein believed that messing up was a part of being successful-an idea that, itself, has proven relevance.

Einstein was a super genius but that doesn’t mean he never made any mistakes or that he finished everything he started. He believed that messing up was part of being successful. Einstein’s mistakes and unfinished work, like those of many people, have proven valuable and have even led to new ways of thinking. Here’s one example: