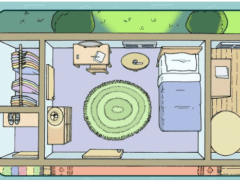 Follow these easy steps to create a floor plan of your room.

Archaeologists create different kinds of maps. Some show an entire excavation site. Others show sections of a site. To map the layout of the buildings they excavate at a site, archaeologists make maps called plans.

A plan shows the walls of a structure along with everything found there. These plans help archaeologists understand what happened at that site, like where people cooked or slept. For example, imagine that an archaeologist finds a row of houses that don’t have kitchens inside. Then a hearth is discovered outside between the houses. The archaeologist might hypothesize that several families cooked together.

Now it’s time to map your own world by creating a floor plan of your room.