OLogy: Create Your Own Time Capsule 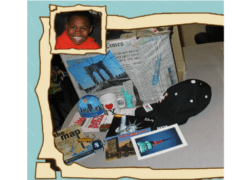 What would the objects say about you and the time you live in?

When archaeologists dig, they never know what they will find—pottery, gold jewelry, religious statues. Every object is like a message from the past, telling us what life was like long ago.

Imagine what archaeologists of the future will find in your hometown! Maybe a baseball or a computer? What messages would these things send about the way you lived?

Usually we don’t think about the artifacts we leave behind. But by making time capsules, we can decide what message to send to the future about our own lives. The American Museum of Natural History has its own time capsule. It was started in 1999, to be opened in the year 3000. Many people suggested words, objects, and music for the  time  capsule. In the end, items were chosen that would tell people of the future about typical daily life in a small American town in 1999. Those items included a cell phone, a unicorn Beanie Baby, photographs and coins, and many other objects.