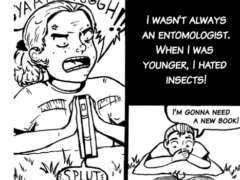 Hi, I’m Carly and I’m a graduate student at the American Museum of Natural History. I study a group of insects called Hymenoptera, which includes ants, bees, and wasps. My specialty is parasitic wasps, which are wasps that lay their eggs on, or inside, the bodies of other insects (generally caterpillars or larval beetles). The “host” insect’s body becomes food for the growing larva. This process, when it kills the host, is referred to as parasitoidism.

I study both the physical features (known as “morphology”), as well as the DNA , of these wasps to understand how they have evolved. By comparing the similarities and differences between different species, I try and figure out how they are related to one another and how they’ve changed over time.

I also love to draw! In this comic book series, follow me as I transform from insect-hater to entomologist, shrink down to wasp-size, make new winged friends, and more!