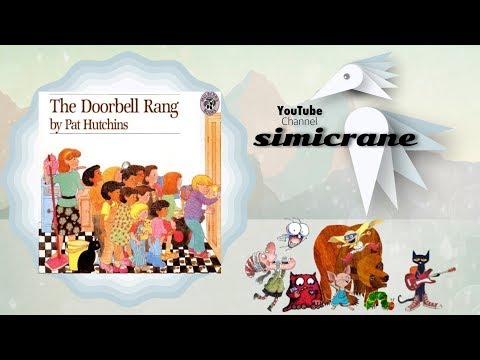 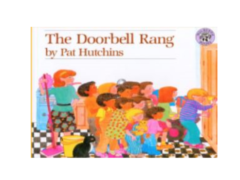 In this activity, the book ‘The Doorbell Rang’ by Pat Hutchins provides an engaging context in which children can practise sharing.

Children often enjoy sharing a book with an adult and talking about it.

Adults could provide suitable books with matching props to act them out. Here we focus on using The Doorbell Rang by Pat Hutchins, which is suitable for Reception children.

The Activity
Read and enjoy The Doorbell Rang a number of times with the group. Acting out the story involves children in sharing a number of cookies between different numbers of people (using salt dough cookies and paper plates).

Describing
Tell me about this picture (showing children who are about to take cookies from the plate). What do you notice? What do you wonder?
Have you ever shared any cookies? Tell me about what happened. How many people were there?
Here are two (or three, or more) toys. Tell us how you could share the cookies out so that they all have the same number.
Reasoning
What will happen if another person turns up now? Can you explain why you think that?
How do Sam and Victoria know that there will be three cookies each? Shall we act it out?
Have they all got the same? How do you know? Can you prove it? Can you show me?
Opening Out
What do you think the children should/might do now? (Especially at the last doorbell.)
I wonder what would happen if there were a smaller number of cookies? An odd number of people at the door? Or a number giving remainders? E.g. ten shared between three or four.
Recording
Would you like to do a drawing/picture to show how Sam and Victoria could share out the cookies fairly? To show how you have shared them?

Counting:
• cardinality – the last number tells you how many there are
• counting for a purpose – to see if everyone has the same number

Comparing:
• saying who has more or not as many
• saying which numbers are more or less than others

Development and Variation
Children could be invited to create their own version of the story, which an adult could scribe for them to illustrate as a group book.Instead of changing the number of children, you could change the number of cookies to share, and explore which numbers ‘work’.

A similar story about Pirate Panda is presented in Maths Story Time.
Another activity based on a book is Maisy Goes Camping.

Other books which lend themselves to mathematical discussions include:
Jim and the Beanstalk by Raymond Briggs, about measuring the giant for glasses.
Mouse Count by Ellen Stowe Walsh, about a snake collecting mice to eat.