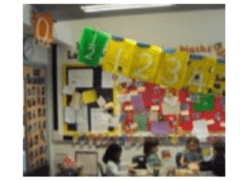 This task provides children with the opportunity to investigate halving different shapes and check that they have made two halves.

Children often enjoy finding things that are the same.

Adults could ask children to find half of lots of different things, quantities and collections.

The Activity
With a playdough cookie, pose a story problem about having to share it with a friend. How could you do this?
Cut or break it into two pieces and keep the bigger ‘half’ yourself. Ask the children what they think about this.
Present a range of materials such as paper shapes, string and bananas. Challenge children to halve them and then discuss and display the results.

Counting and cardinality:
• using counting to check that both amounts are the same

Subtracting:
• predicting the result of taking away one number from another
• using the inverse addition facts, e.g. “Half of ten is five, because five and five make ten”

Dividing:
• understanding that dividing by two results in two equal parts – explaining this as ‘same’ or ‘fair’, or justifying by matching amounts

Measures:
• awareness of aspects such as length, volume, weight, area
• comparing by estimating or directly, or using measuring tools such as identical containers or
balance scales
• explaining how they know that the halves are the same amount

Make a display of halves.

Where does half go on the number line? Make an ‘ages’ line from birth to 20, for children and siblings, to include half years e.g. one and a half, four and a half …

Use tablets to halve pictures, and use mirrors to halve (and double) pictures.