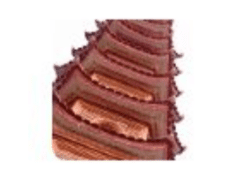 The Tower of Hanoi is an ancient mathematical challenge. Working on the building blocks may help you to explain the patterns you notice.

This problem is in two parts. The first part provides some building blocks which will help you to solve the final challenge. These can be attempted in any order. Of course, you are welcome to go straight to the Final Challenge without looking at the building blocks!

In this problem, you will be working on a famous mathematical puzzle called The Tower of Hanoi. There are three pegs, and on the first peg is a stack of discs of different sizes, arranged in order of descending size. The object of the game is to move all of the discs to another peg. However, only one disc can be moved at a time, and a disc cannot be placed on top of a smaller disc.

What is the smallest number of moves needed to complete the Tower of Hanoi game with:
i) One disc?
ii) Two discs?
iii) Three discs?
iv) Four discs?

Do you notice anything interesting about the way the number of moves increases?
Can you explain any patterns you find?

The Tower of Hanoi puzzle can be completed in 3 moves with two discs. Can you use this to work out how many moves would be needed with three discs?

The Tower of Hanoi puzzle can be completed in 15 moves with four discs. Can you use this to work out how many moves would be needed with five discs?

In general, can you describe a way of working out how many moves are needed when one extra disc is added?

Explain how you could work out the number of moves needed for the Tower of Hanoi puzzle with n discs.

Extension:
There is a legend that a 64-disc version of the Tower of Hanoi is being played out in a temple, and when the final move is made, the world will come to an end. If one move is made each second, how long would it take to complete the game with 64 discs? Do we need to worry yet, if the first disc was moved at the very beginning of time?