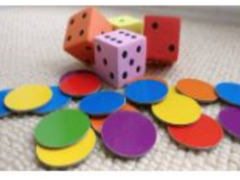 In this game, children will use their addition and subtraction skills to keep track of the number of toys hidden inside a box when toys are added in or taken out.

Children often enjoy visualising how many toys are hidden in a box.

Adults could start by using three large toys and a giant box with a group of young children. Then use bigger numbers or miniature toys with smaller groups or individuals.

The Activity
Put toys one at a time into the box, so children cannot see them inside, counting all together. Ask: “Can you show on your fingers how many are hidden?” Display a large numeral.
Add one to the box, without showing the objects inside, and ask children to show on their fingers, “How many are there now?”. Then show how many are inside the box and count to check.

Counting and cardinality:
• saying numbers in the right order
• saying one number for each object
• saying how many there are by showing ‘finger numbers’, by counting fingers, and instantly (without counting)

Matching numerals and amounts:
• selecting numerals to match the starting and finishing numbers

Adding:
• predicting adding one to a number (or two)
• modelling on fingers
• counting all e.g. putting up four, then two more, then counting from one through to six
• counting on, starting from the first number – “Four, five, six”
• visualising or counting mentally, e.g. nodding at hidden objects or saying “I went four, five, six”
• using number facts – “Because there were three and you put one more”, “I know two and two is four”

Subtracting:
• predicting taking one from a number (or two)
• modelling on fingers
• counting all, then how many are left – putting up six, putting down two, counting the four still up
• visualising or counting backwards mentally – “I went six, five, four so there are four”

Vary the context: use pennies in a pot, children behind a screen, dinosaurs in a cave. Model with fingers, Numicon, large number line, ‘staircase’ of cubes or other resources.