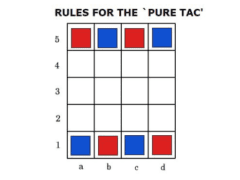 This is a challenging game of strategy for two players with many interesting variations.

This is a challenging game of strategy for two players with many interesting variations, some of which are suggested here, and some will follow in later months. NRICH encourages you, as always, to try variations of your own.

RULES FOR THE `PURE TAC’

The game starts with the 4 red and 4 blue pieces arranged on a 4 by 5 board as shown.

There are two ways to record a game, as a sequence of moves or as a sequence of positions. For example BLUE may start by moving the piece in position b5 down to b4 and you would record this as (b5,b4).

SEQUENCE OF POSITIONS
To record each position you need to name the four squares containing red pieces and the four containing blue pieces. The above game consisted of a sequence of nine moves and to record the whole game you could record the position resulting from each move. For example, this is the last but one position in the above game.:
BLUE a3, a4, b2, d5; RED a4, b2, c3, d1

BE A WINNER, ANALYSE THE TACTICS

To record a number of winning positions you will need to make drawings of the board or record the positions as follows:

Notice that a winning position does not necessarily have 3 in a line, but it must be such that the opponent cannot stop you getting 3 in a line whatever he or she does.

Look out for opportunities to put yourself in a winning position and to avoid a losing position.

Method 2 – Back-track
Record the sequence of moves in games and then back track the moves leading to one player reaching a winning position. Go back several moves and see where the loser might have avoided defeat by making a different move.

Method 3 – Name tactics
Describe strategies such as `bring pieces into play close together’, `avoiding pieces getting out of the action’, `making double threats’ (i.e 2 ways of making a line so your opponent can only block one), if you like give them names, and remember when and how to use these tactics.

Method 4 – Look ahead
Think what your opponent will do next if you make a certain move, then how will you respond and how might your opponent respond to that… and so on. Plan to get yourself into a winning position 2 or more moves on.

Method 5 – Statistical play
This could be the basis of writing a program for a computer to learn to beat everyone.

This is a variation on `Pure Tac’.

One player places all 8 pieces into whatever positions he or she chooses. The other player gets the choice of colour and whether to move first or second.

Play you friends across the world by email! You can take time to think! Send moves or positions as described above. If you think you can be a champion, challenge opponents on the NRICHtalk section of the webboard.

Watch out for more variations in the coming months.