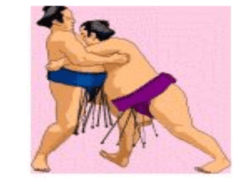 A number game requiring a strategy.

When Push Comes to Shove

An interesting variant is the introduction of a zero card to the initial allocation.