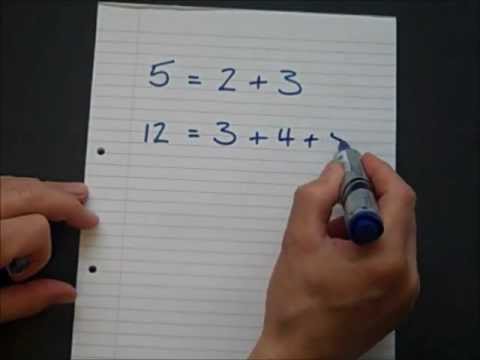 Watch the video to see how numbers can be expressed as sums of consecutive numbers.

Investigate the questions posed in the video and any other questions you come up with.

Can you draw any conclusions?
Can you support your conclusions with convincing arguments or proofs?

If you are unable to view the video, click below to reveal an alternative version of the problem.

Charlie has been thinking about sums of consecutive numbers. Here is part of his working out:

“I wonder if we could write every number as the sum of consecutive numbers?”

“Some numbers can be written in more than one way! I wonder which ones?”

“9, 12 and 15 can all be written using three consecutive numbers. I wonder if all multiples of 3 can be written in this way?”

Choose some of the questions above, or pose some questions of your own, and try to answer them.

Can you support your conclusions with convincing arguments or proofs?