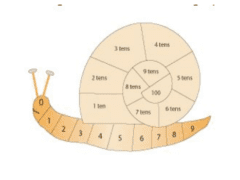 This is a game in which your counters move in a spiral round the snail’s shell. It is about understanding tens and units.

You will need the board which you can download here, an ordinary dice and a pair of matching counters for each player.

How to play the game:
To start put both your counters on “0” – which is the snail’s eye!

The first player throws the dice and moves one of their counters that number along the snail’s body. Take turns at throwing the dice.

Go on moving the first counter along the snail’s body and moving the second counter to the next “ten” every time you get to the end and go from 9 to 0.