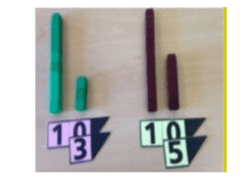 In this task, children will learn different ways of representing the same number.

Children often enjoy finding things which are the same.

Adults could provide lots of different images and resources to show the value of numbers and numerals.

The Activity
Hold up five fingers, a giant dotty dice or a large numeral and ask the children to show you that number in different ways. Put out lots of different things which children can use to show the numbers, including countable items like conkers, small world toys, large blocks, multilink, dot images like dice and dominoes, structured apparatus like Numicon, Cuisenaire or an abacus, things in packs like egg boxes and crayon cartons, and number symbols including washing lines, number lines and 100 squares.

Describing
How does this five look different from that five?
What does this pattern of five look like?
What can you see?
How did you make five with two hands?
Reasoning
How do you know these are the same number?
What is the same and what is different about these fives?
Opening Out
Can you show me five fingers a different way? Is there another way? What different patterns can you make with five counters?
Can you see any numbers hidden inside this pattern of five?
Can you show me 15? How do you know it is 15?
Recording
Can you draw or record your patterns?
Can you put something on the paper to show how many there are? Can you put some numbers to show what hidden numbers you see?

Counting and cardinality:
• using counting to check
• subitising – recognising the number of items without counting
• conservation – rearranging items and explaining that the number is the same because the arrangement can be returned to the original and none have been added or taken away
• matching two groups one-to-one to show that they have the same number

Matching numerals and amounts:
• selecting number symbols to match the total or numbers inside numbers

Composition of numbers:
• talking about numbers being made up of other numbers: “It’s six because I see three and three”
• knowing number facts e.g. “Five and one more makes six”