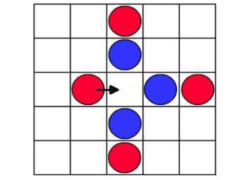 An ancient game for two from Egypt. You’ll need twelve distinctive ‘stones’ each to play. You could chalk out the board on the ground – do ask permission first.

Twelve distinctive ‘stones’ each.
A game board of 5×5 squares.
To start:

The winner: a player wins outright if he can capture all the enemy stones.

Each player may make a barrier behind which there are only his own pieces and these can be moved without fear of attack. The initial placing of the stones is important in planning such a barrier or in preventing the other player from making one. If a barrier is set up, then the player with most stones on the board wins. If they have the same number of stones on the board the game is drawn.

Variations:
The board may be increased to 7 x 7 or 9 x 9, each of you then has twenty-four or forty pieces.