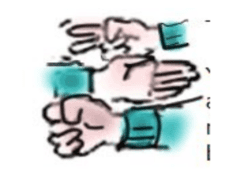 Play this well-known game where each player is equally likely to choose scissors, paper or rock. Why not try the variations too?

You make your hand into a fist for the rock, hold it flat for paper and put two fingers out for scissors. Each player simultaneously makes one of the signs and of course scissors beats paper, paper beats rock and rock beats scissors.

In this game both players are equally likely to choose scissors, paper or rock. We say they choose each one with probability one third.

Try a version of the game which is played in China. You may need a referee! You start the game facing each other with feet together. Each time the loser has to step sideways so that his or her feet are wider apart and gradually you will both be doing the splits. Who can last longer before giving up or falling over?

To vary this game in a more mathematical way change the probabilities for making the choices. For example suppose rock is chosen half the time (on average) and scissors and paper one quarter of the time each. To do this, each player could use 4 cards and draw rock on two cards, scissors on one, and paper on one. Each time the players simply choose one of their four cards at random.

Suppose you have a scoring system giving different points for the different results.

When the choices of scissors, paper and rock are not equally likely can you always vary the scoring system to make it a fair game?

Ten Up The two teams stand in parallel lines. The players at the top of the line play and the loser goes to the end of the line. The winning team is the first to get ten points.

Survival The two teams stand in parallel lines. On the word ‘go’ players challenge the member of the opposite team next to them. Losers drop out. When the numbers in the two teams are unequal it is the players at the head of the line who challenge their opponents and the extra survivors watch. Of course this gives the team with the most survivors the best chance of winning the match but that’s just life!