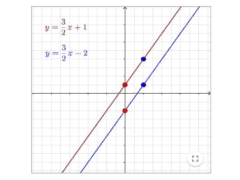 Investigate what happens to the equations of different lines when you reflect them in one of the axes. Try to predict what will happen. Explain your findings.

Here are two sets of graphs. Each shows a pair of lines which are reflections of each other, one in the horizontal axis and one in the vertical axis.

Move the red and blue dots on the interactivity to create some more pairs of reflected lines.

What can you say about the equations of two lines if one is a reflection of the other in the horizontal axis? What about a reflection in the vertical axis?