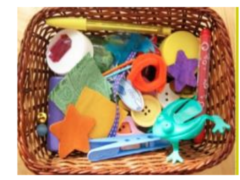 This activity involves sorting toys into categories by using comparing and classifying skills.

Children often enjoy putting ‘like’ things together, when putting things away and gathering them together.

Adults could have lots of boxes (or trays), perhaps ‘shoe-box’ style, available for children to use as well as large groups of small items like zoo/farm animals, train set carriages or any similarly shaped items.

The Activity
You could provoke the children by saying something like, “These have all got muddled up“ as you present them with an assortment of small items.

Describing
Tell me about your box and the … you are putting away.
How many will fit? Will they all fit?
Reasoning
Looking at all the boxes we’ve got here, who has the most … in their box?
How do you know?
Could we fit more/fewer in … ‘s box?
Opening Out
Which boxes/trays would be best for keeping which things in?
Are some things better to be kept in something other than a box or tray? If so, what?
Recording
Do you want to make a new label for the box showing how many are inside?

Same and different:
• grouping according to a rule, e.g. “These are good for our artwork when we need to stick bits onto card”

Counting and cardinality:
• noticing that amounts increase as more are gathered together
• counting and cardinality – progressing from knowing some number words to saying one number for each object, then knowing the number of the whole group
• relative number size – comparing numbers
• part-whole numbers – noticing numbers within numbers, for subgroups within collections

Development and Variation
Many settings use songs associated with different parts of the day. Using such songs can help children focus on packing things away.

Similar aspects of learning and development are highlighted in the activity Collecting found in the NRICH EYFS collection. Tidying is also linked to this activity but has more of a numerical focus.