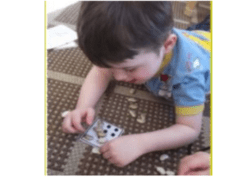 This task provides children with an opportunity to count ‘golden beans’ and find a number card to represent how many they have.

Adults could provide items for the children to count (such as golden beans) and provide a variety of number cards for them to use in the counting.

The Activity
Leave a pile of golden beans and a range of number cards in a place for children to explore them. Some cards may have numerals on them, some may feature dots, some may have representations of apparatus found in your setting.

Describing
Tell me about your beans.
(If they’ve used cards) Tell me about the cards you’ve used.
Reasoning
Why did you choose that card?
What would we have to do to make sure you have the same number of beans as …?
Opening Out
Let’s look at …‘s beans too. What can you tell me about their beans?
How many do you have altogether? How do you know?
Recording
Can you write/draw/put on paper the number that you have? What would you like to take a photo of?

Counting and cardinality:
• using number words and language about counting e.g. none, zero
• reciting (some) number names in sequence
• cardinality – saying how many there are altogether
• showing on fingers how many there are
• progressing from knowing some number words to saying one number for each object, then knowing the number of the whole group
• selecting a small number of objects from a group when asked
• showing curiosity about numbers by offering comments or asking questions
• relative number size – comparing numbers

Linking symbols and amounts:
• finding numerals to match the number

Development and Variation
The mathematics of this activity could equally well arise from groups of objects collected by the children themselves, rather than through the beans placed in the setting by the practitioner.
You may like to encourage children to create patterns and sequences with their beans, if they do not do this naturally. Provide materials with which to record their patterns, should they wish.
You could put some beans in a box/bag and invite learners to estimate the total number before finding out the exact number for themselves.
The NRICH activity Maths Story Time, which focuses a little more on the early ideas associated with division, could follow on from this one.
Resources
Beans (painted gold) or other items, perhaps linked to the current theme or a recently-read story.
Cards featuring numbers in the form of dots.
Cards featuring numerals.
Cards featuring numbers in the form of any apparatus used in the setting.
Math Topics Resource Audience
Number Values & Counting
Early Childhood, Educator
RELATED LISTINGS
Showing 1 - 2 of 2
NRICH
NRICH (University of Cambridge)