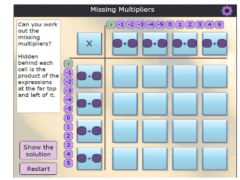 In the multiplication grid below, the headings and the answers have been hidden.

Each of the headings is an expression of the form x+a where a is an integer between −5 and 5. By revealing some of the answers, can you work out what each heading must be?

Drag the green and purple labels onto the headers to make the correct expressions.

What is the smallest number of answers you need to reveal in order to work out the missing headers?

Once you’ve developed strategies for finding the factors in the interactivity above, you might like to have a go at solving some bigger grids which include coefficients of x greater than 1 in the row and column headings:
Six by six grid
Eight by eight grid
Ten by ten grid

This interactivity  is similar to the one used in Missing Multipliers so you may wish to work on that first.

This is our collection of games specially chosen for use in the computer room or on the whiteboard.