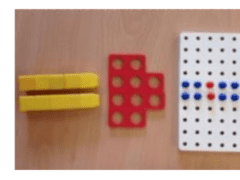 This story about some troublesome dogs encourages children to find and model doubles of different numbers.

Children often enjoy matching amounts and spotting things which are the same.

Adults could provide patterns of numbers which are doubles, e.g. on dice, dominoes, egg boxes etc.

The Activity
Tell a story of someone having trouble looking after two dogs who will not do what they are told. Then they get given two more dogs to look after – now they have four and they have ‘double trouble’! What about if they have three dogs – how many would be double trouble? Ask the children to model doubling numbers up to five on their fingers and to select images to match the story numbers, e.g. dominoes and dot patterns.

Describing
What do you notice about the numbers and their patterns?
What happens if you match the doubles numbers to a number line?
Reasoning
What do you have to do when you double? How do you know a number is a double?
Opening Out
Encourage children to make ‘double’ numbers in two column arrays, with objects, counters and pegboards.
Identify the double numbers with dice, dominoes, egg boxes, multilink etc.
Make up other patterns with double numbers.
Compare patterns for the same number e.g. double 5 domino and 10 as an array.
Recording
Photograph, stick, stamp or draw patterns for ‘doubles’. Match doubles patterns to a number line.

Counting and cardinality:
• counting to check the same number has been added when doubling

Development and Variation
Doubling and halving: invite children to double and halve numbers, using objects arranged in two-column arrays e.g. with pegboards and multilink. What happens when you halve a number?

You could use other story contexts: a sheepdog with troublesome sheep, or a cat looking after kittens or …

Older children can play a game in pairs with dice: one gets the number of objects, the other doubles it. They can check by matching and counting. Repeat with a range of apparatus.