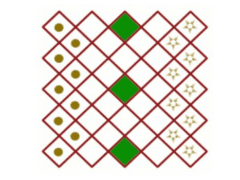 A game for two players. You’ll need some counters and somewhere to draw a board.

This game is taken from a book of board games for 2 players by Frank Tapson and Alan Parr called ‘Pick a Pair’. You need some counters or coins for the crocodiles and alligators in this game.

One player has 9 crocodiles on the spots and crocodiles can move one square at a time in any direction, including horizontally or vertically through the corners of the squares.

The other player has 9 alligators on the stars. Alligators can move 1 or 2 squares at a time but only parallel to the sides of the squares and not horizontally or vertically through the corners of the squares.

The 3 green squares are islands.

Players take turns moving their pieces and the object of the game is for a player to be the first to get one of his pieces on each of the three islands.

Only one piece is allowed in any square. If one piece lands on another, then the piece landed on is removed. There is no jumping. These rules apply in the green squares as well.

Here is a large version of the board for printing