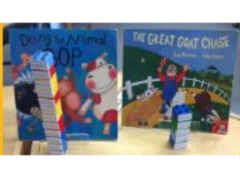 This task encourages children to count and compare numbers when using ‘voting bricks’ to vote for a book at story time.

Children often enjoy having their say and helping to decide events by choosing between options, such as which book to share in story time. This provides purposeful opportunities for comparing numbers.

Adults could set up a ‘voting station’, displaying options such as books, and provide ‘voting bricks’ with each child’s name on to be placed next to their choice and number cards to label the results. Timers could be provided that children could use to time themselves as they fill up the container.

The Activity
Ask children which of the two books displayed they would like at story time and give each child a brick with their name on, to place next to the book of their choice. Make towers of the bricks and discuss which option has the most votes, by comparing the numbers of bricks.

Describing
Which tower has more bricks?
How many do they each have?
Reasoning
Which book do most people want?
How do you know?
How many people have not voted yet?
Opening Out
Suppose we have three books to choose between?
There are two more people to vote – will their votes change the result?
Recording
Can you put something on paper to show which one most people wanted?

Number
• comparing more and less and being able to say “This has more than that one”
• cardinal counting – counting and saying how many there are
• comparing numbers e.g. “This has more because it has eight and that one only has six”
• estimating how many there are in a tower, or with scattered bricks
• predicting addition e.g. “If two more people vote for that one, then it will have eight”
• reasoning – “But if this one gets two more, it will win, because it will have more”

Data handling:
• interpreting the bricks as signifying the numbers of people who wanted an option.

Development and Variation
You could start by asking children how to decide – e.g. by raising hands and then discussing how to make it easier to see what happened and whether anyone has voted twice.After the vote, two children could count the bricks and find number cards to match.Voting matters more if something happens as a result! Children could choose games to play outdoors or role play areas to set up, what to cook or make, or destinations for outings. Children may try to influence their friends as voting progresses: you could discuss how this might be avoided e.g. by posting votes secretly in a ballot box for each book.
Resources
Duplo bricks with children’s names or name cards.
Named pebbles or hand prints.
A table display with number cards to label the results and a number track for reference.
Posting boxes for each option.
Would You Rather? by John Burningham provides some engaging fantasy options.
Math Topics Resource Audience
Number Values & Counting
Early Childhood, Educator
RELATED LISTINGS
Showing 1 - 2 of 2
NRICH
NRICH (University of Cambridge)