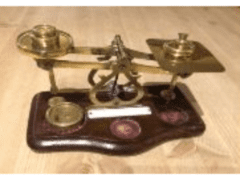 In this activity, children will use the language of weight when comparing objects on a balance scale.

Adults could provide an assortment of balances which might have tubs, buckets, pans… You can even use coat hangers.

The Activity
Place the balances near areas where children might find items to put into the pans/buckets etc. Many individual items may be suitable, such as cars, cotton reels, counters, shapes, stones, acorns, buttons, fruit… The list is endless, and the children will try objects that would not necessarily occur to you! Simply give them time to explore and experiment.

Describing
Tell me about what we have here (on one side of the balance) and here (on the other side).
What happened when you put that on?
Reasoning
Why did that happen?
What happens if it goes here (on the other side) instead? Why?
Opening Out
What do you think will happen when you put that there? Why? Try it!
How is that one different to yours?
Recording
Would it help you remember what is here if you get a friend to take a photo of you, or if you draw a picture?

Number:
• counting and cardinality – progressing from knowing some number words to saying one number for each object, then knowing the number of the whole group
• counting an irregular arrangement of objects
• finding the total number of items in two groups by counting all of them
• relative number size – comparing numbers
• part-whole numbers – noticing numbers within numbers
• selecting the correct numeral to represent 1 to 5, then 1 to 10 objects
• beginning to use the vocabulary involved in adding and subtracting

Same and different:
• developing language to compare and contrast e.g. more, fewer, heavier, lighter…
• ordering according to a rule e.g. heaviest to lightest, tallest to shortest…

Development and Variation
You could set up a role play area which might encourage children to explore the idea of weight a bit further. For example, how about an airport check-in desk where luggage is weighed, or a post office, or a shop selling fruit/vegetables?
The NRICH Early Years activities Presents and Packing also give opportunities for similar areas of mathematics to be experienced. Golden Beans may also be useful for offering further ideas in which to explore comparing and contrasting in the context of number.
Resources

As many different examples of balances as you can gather – see the pictures above.
A variety of objects that can easily be placed on the balances.
A camera may also be useful.